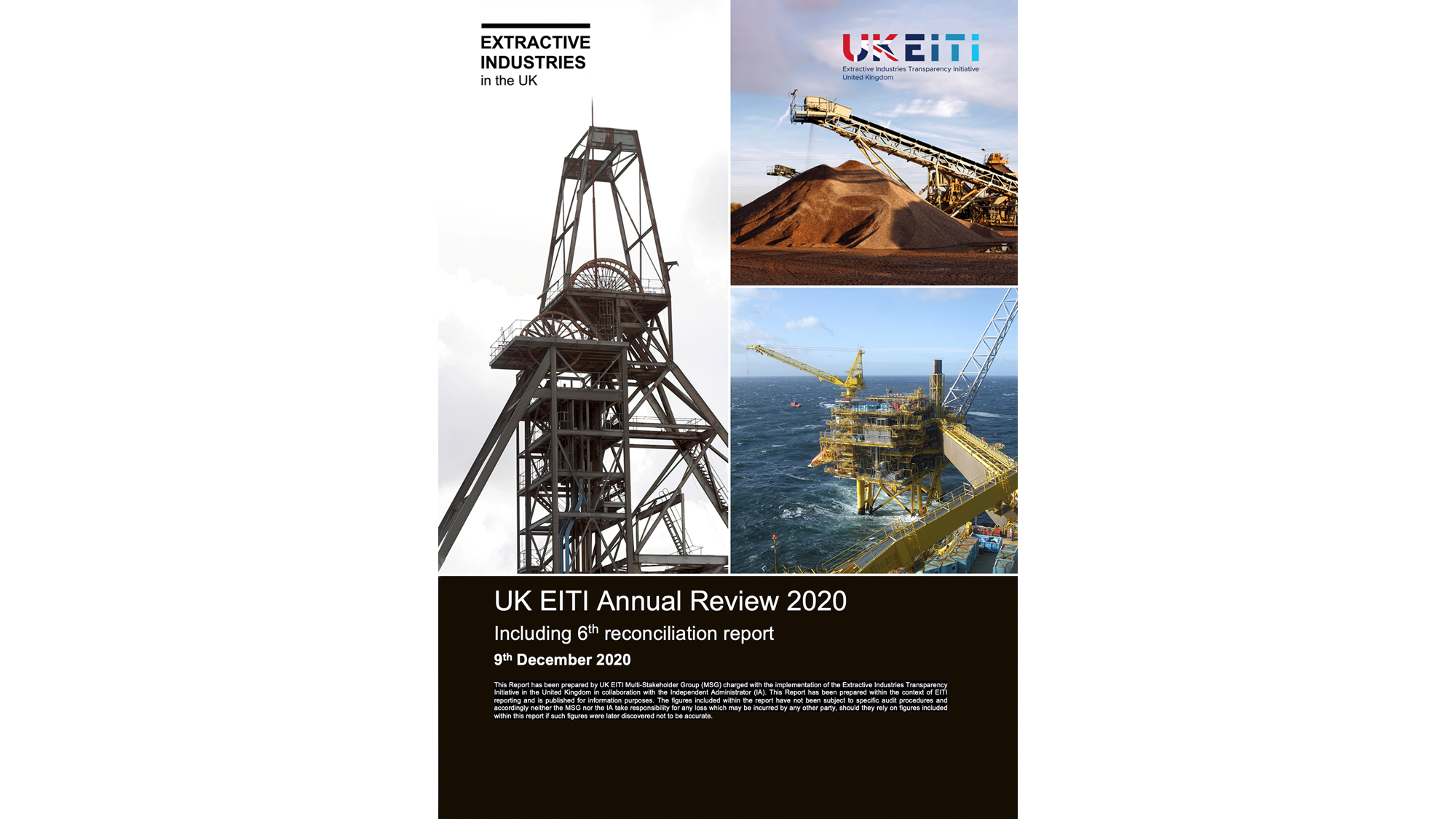 The video of the launch event for the UK EITI Annual Report 2020 is now available.

The launch included a keynote speech by Lord Callanan, UK EITI Champion and Minister for Climate Change and Corporate Responsibility and perspectives on EITI from both industry and civil society speakers. The speech can be read in full below.

The UK EITI Annual Review 2020 details the UK’s progress in implementing EITI and includes the latest data on the extractive-related payments made to UK government agencies, following the recent payment reconciliation process.

As the Champion for the UK Extractive Industries Transparency Initiative, I am delighted to be able to speak to you today to launch the UK EITI Annual Review 2020.

I would like to share a few words with you on the UK’s commitment to transparency in the oil, gas, mining and quarrying sectors, and the role of EITI in achieving this.

EITI plays a key role in improving the governance and transparency of natural resource extraction around the world. Recent research suggests that EITI’s work to ‘open up the books’ strengthens trust between industries and communities, holds governments more accountable for huge sources of revenue, and improves national investment climates.

As such, I am encouraged to see that more countries than ever before – 55 - have now committed to EITI implementation. This will help create a more transparent business environment across the extractives sectors worldwide.

Supporting EITI elevates the UK’s global standing as a leader on transparency and enhances the UK’s reputation as a trusted and reliable place to do business. Promoting the EITI principles enhances our ability to attract new investment from overseas and open up new markets for exports.

EITI in the UK

The Government remains firmly committed to implementing EITI in the UK: it increases the transparency of our own extractives sector and ensures that we are leading by example internationally.

A key reason we are implementing EITI in the UK is to show leadership, applying the standards we demand of others to ourselves. But there are real benefits for us too, as EITI helps explain the ongoing role of oil and gas, mining and quarrying in our economy.

UK EITI has now put on public record six years’ worth of verified data on the financial flows between government and industry, covering the calendar years 2014-19. The latest data show total net payment flows of over £1.5 billion from in-scope UK companies to the UK Government. Thanks to the work of EITI, and as set out in today’s report, we have public confirmation that the revenues are properly accounted for, both by companies and government agencies.

Our aim in publishing this data is to explain the positive contribution that the extractive sectors are making to the economic and social development of the country, and to demonstrate the industries’ commitment to transparency and good governance.

Extractive industries in the UK

The extractive industries contributed a total of £20 billion to the UK economy in 2019. They employ some 60,000 people directly and support many more jobs in downstream industries and supply chains.

And the sectors are evolving in important ways. As set out in today’s report the oil and gas sector continues to transform and reinvent itself, which has allowed a sustainable reduction in operating costs and production efficiency improvements across the North Sea basin.

There have also been significant developments in the mining and quarrying sector, including plans to reopen the South Crofty Tin mine in Cornwall, where tin is projected to be a major mineral in new technology such as electric vehicles.

There are also the two new lithium mine projects in Cornwall, from Cornish Lithium and British Lithium, which should go some way to meeting the UK’s future demand for battery production, including for electric vehicles. As we announced recently, we will be phasing out sales of new petrol and diesel cars and vans by 2030 as part of the Prime Minister’s 10-point plan for a Green Industrial Revolution.

In thinking about the evolution of these industries, we must of course consider climate change: the impacts it will have and the mitigations we must put in place. As the UK prepares to host the COP26 conference in November 2021, the UK Government is committed to leading the world in tackling this immense challenge.

The transition to a low carbon economy will mean that oil and natural gas will have a smaller role to play in meeting energy needs in the future.  But, as set out by the Committee on Climate Change, demand for oil and gas will continue for decades to come, even as we build a low carbon future. An orderly energy transition, maintaining UK oil and gas production, is crucial to maintaining security of supply.  It is important that the public understands the activities and revenue flows of the extractive industries through this transition, and here UK EITI can play a useful role.

Transparency around climate change risks and opportunities is a priority for this government, and in November 2020 the Chancellor announced that the UK will become the first G20 country to make disclosures aligned with the Taskforce on Climate-related Financial Disclosures fully mandatory across the economy, with most of its requirements introduced over the next three years.

The UK will also implement a green taxonomy, which is a common framework for determining which activities can be defined as environmentally sustainable – this is expected to improve understanding of the impact of firms’ activities and investments.

I would like to see UK EITI forge a role in building public understanding of these important developments in the years to come. The new UK EITI website, which was launched in May this year, provides an excellent platform for making data on the extractive industries available and accessible to the public in a timely way.

Looking ahead, we are looking forward to being re-assessed against the EITI Standard next year. The EITI’s international board has recently updated its Standard and revised its process for assessing countries’ progress. I hope that the UK will be amongst the first to go through this process, both to demonstrate the progress we have made, and to help EITI test its new approach.

To conclude, I would like to thank our Multi-Stakeholder Group and its secretariat for all the work that lies behind today’s report. It is hugely welcome to have a forum in which representatives from civil society, industry and government work together to inform public understanding and debate.

I also want to give particular thanks to the 54 companies who voluntarily took part in the reconciliation of payments process this year. Given the challenges every business is facing as a result of the global pandemic, this was a fantastic response. I would like to thank each and every company that took part, and I hope that you will all continue to support this important initiative in the years ahead.

We should be proud of what has been achieved in this report, which demonstrates the commitment of government, industry and civil society to extractives transparency in the UK. Let us to continue to strive for that.

I look forward to working with you all as we take UK EITI forward into 2021.